skip to main | skip to sidebar

The Maura Tierney Line: The Parliament Proceedings of April 20th, 2009

Parliament voting records were not kept for this session. Records will be kept from here on out.


If anyone has a celebrity to be put on the next docket while the Shoutbox is dead, this wouldn't be a bad spot.
Posted by Felix Heredia at 7:50 AM 2 comments:

I think it's pretty well known among my readers that I've been dealing with some pretty serious stuff lately. What with my brother getting busted and my wife canceling our newspaper subscription in the wake of such financial uncertainty. And this has been the place that I've been able to just let it all go. To let my hair down, so to speak. To deal with all my demons. I just want to say how much I appreciate all of the support that you guys have given me. You readers are the best in the business. And in these uncertain times, you all know how important stability, loyalty, and certainty and support can be. Or, at least, I HOPE you know. You're all my pebbles and I'm your rock and my brother's in a hard place. This is how it is right now and we're going to get through it. ALL of it. It's togetherness. it's sticking together through the hard times and the even harder times. Through the sweaty smelly hot days of summer to the cat boodle stench of winter. I feel like better times are ahead. I feel better than I have for months. The rash cleared up. My eyebrows are getting fuller and David Hyde Pierce has started eating mints. Things are definitely starting to come up Morgan, folks, and I couldn't ask for better people to share it with.
Posted by Unknown at 7:01 AM 1 comment:

I LOVE my GRammy!

I hope you were one of the hundreds of people(plus ME) that watched the Grammy last night because if you didn't then you missed one really wonderful show. I can honestly say that music is the love of my life. If I didn't have the gift of the ear for song, then I don't know what I'd do. I'd probably listen to a lot less music though! (haha) And that would make me sad because I listen to music all of the time and it's pleasing to me so much. It's amazing how much different the singers look in real life than how you picture them in your head when you're watching them in your head from the radio. Like Jennifer Hudson. I never knew she was black. I was very surprised but my shock turned to pleasantness when the shock subsided. I think her ethnicity makes her voice even more special. And she looks even better black! My wife didn't think so. My wife started talking about how fat she looked or something. I didn't really hear everything she was saying because the rage filled my head up so fast that I got dizzy and couldn't hardly see. All I could hear was the blood rushing through my head. I can honestly say that it's the first time I ever spit in my wife's face. She was plum surprised TOO! (haha) Anyways, we worked it out. She thinks Jennifer Hudson is beautiful now and I feel the same way about my wife. All in all it was an evening with Grammy that I will never forget until next year when it will probably be even BETTER.
Posted by Unknown at 6:49 AM No comments:

Jessica Simpson is far from fat. I don't know why they keep saying she is. If she was a fattie, then she wouldn't still be dating Tony Romo. Tony Romo is not the type of guy that would date a fat girl. he commands the BEST. He's into the finer things and he's probably really shallow. Look at THOSE dimples! You know who IS fat? Me. I'm a big hefty guy and you can just ask my brother if you don't believe me. He's bigger than me, even. Tony Romo wouldn't date me OR my brother because we don't BRING IT on a regular basis. The other day my brother told me that he thought Jessica Simpson was the type of girl that wuold bake you a whole mess of cookies and then not even eat ONE. And people say she's FAT? Craziness.
My brother also told me that the GRIZZ fired Mark Ivaroni. I say good riddance to bad coaches but I do hate to see anyone lose their job. Sometimes I think the only way we're going to get through any of this America mess is to have MORE jobs and MORE money. That's why we vote, though. I voted historically, so they say, and I'm not going to apologize for it to anyone. I even watched the GRIZZ on the TV during the King Junior celebrations and the Grizz were NOT fun to watch. Don't get me wrong. I love it when they throw the ball to Rudy and then stand around to watch him. I'd watch him, too. (And I WILL! In the slam dunk contest) And I especially like watching Rudy take all those jumpers with somebody guarding him real close. It makes the MAKES so much more exciting! What I didn't like to see though was not enough sweating, diving, and high-fiving. High fives are super and I hope the new coach encourages those young Grizzlies with MANY high fives! That's why I support Ivaroni coaching somewhere else and more jobs for the America.
GO GRIZZ! Here's hoping I get my newspaper subscription back SOON.
Posted by Unknown at 4:00 PM 2 comments:

My wife canceled my newspaper subscription. Anyone know how the GRIZZ are doing?
Posted by Unknown at 7:41 AM 1 comment:

I've had time to process the loss

and I've come to the conclusion. Grizz wins are super better than Grizz losses and it's not even really close if we were able to keep score. By far, winning would out pace losing in scoring alone. However, winning would easily out rebound and out hustle losing. There is a reason that losing loses and it's not for lack of effort although that is a big part of it. If I had to say for sure why winning beats losing every day of the week then I would simply point to the scoreboard and say that there was the proof. Scoreboard. Winning wins by a lot. Why did the Grizz lose, though? I didn't see the game but I know that it was not because they didn't give it their all out there. Certainly they did or else they wouldn't be my Grizz. They would be another team. Another team that consistently did not do the things they needed to do to win games. And the Grizz just won something like all their games that weren't losses so I know they know how to win. The proof is in the numbers. So, the short answer is that I don't for sure know why they lost since I saw none of the game and didn't find out definitely they lost until yesterday morning, a full day or so after they lost. My hope however is that they don't lose anymore because, as I said earlier, winning beats losing every loving day of the week.
Posted by Unknown at 3:41 AM 4 comments:

4!!!!!!!!!! I think back to when I doubted you, Grizz, and it literally breaks my heart. You are my air. Everything I want to be, you are becoming. Greatness in shorts! I nurtured you from the beginnning and it's all coming to fruition. I want to spank your little red backside but you're all grown up now. I want to hold you in my arms like a mama bear but you're too heavy for me to pick up. I want to pepper your belly with baby kisses but you'd say it was weird and maybe call the cops. Once you were wet behind the ears, but you're big bad Grizzly BEARS and your ears are dry like my wife's roast beef! the limits of your potential are matched only by the farthest stars in the sky. On this day, you mark my words with bold print and exclamation points. These GRIZZ do not hibernate in the winter! They don't need sleep. They need no alarm clock even if they DID sleep. They wake up to the sounds of string music in their dreams. Go, Mighty GRIZZ. Go make your daddy proud. 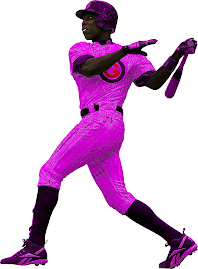